Archeologists have discovered a waggonway which dates back to 1780 underneath the demolished offices of a shipyard on the river Tyne. 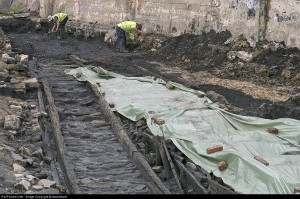 Wooden Waggonway from 1780s being unearthed

In the summer of 2013, thirty metres of waggonway were unearthed some of which was having to be kept under tarpaulin for fear of drying out. Here they can be seen working on a junction where two tracks diverged. The soil on the top left is very moist and there are fears that the wood will have rotted away but is in a much better state on the right. Waggonways were built in the 18th century to enable coal to be transported to colliers on the river for export to cities further south. Wagons would be hauled by horses along this road from the mine to the river. Note that the centre of the road is raised so that the horses didn’t catch their hooves on the sleepers.

Photo and caption by Dave Hewitt. (Original from railpictures)