Progress on the other railway

In April, Andy blogged about the progress of his railway. Now it’s time for mine.

The path is done, complete with the square stepping stones. The concrete blocks that mark the edge of the path and the edge of the garden were done a while ago. In the middle of the circle you can see the blue sandpit in which I mix cement … it is also rather useful for keeping the bag of cement dry.

I decided on Saturday morning that I’ve had enough of not being able to run trains, so I spent all day doing something about it. I set three of the concrete blocks in place (the ones behind the blue sandpit in the picture). The white wooden crescent that you can see on the left was part of the old railway, before I pulled it all up to make way for the log cabin. It has languished behind the compost heap for two years, but I found that it has the right radius to complete the circle. This is a “temporary” thing, so that I can play trains before building all of the rest of the line. More of this in a future blog. 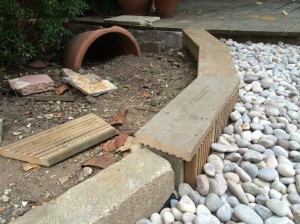 A number of people have asked how I intend to attach the track to the concrete blocks. The blocks are frost-proof, could support a house, and are quite dense: drilling into them won’t be fun. The second picture shows how the deck boards are attached, with timber gripping the blocks on both sides. A rather neat local effect called gravity stops the whole lot from flying away.

In my previous railway, I put roofing felt over the timbers, which was meant to protect the timbers from rain. After a while this looked terrible, and it created a cozy warm place for woodlice and other bugs to nest. This time, the track will go straight onto the wood.

So, no trains running yet, but it feels good to have made some progress towards it.